NEW YORK, NY – Today, 32BJ SEIU and Laborers’ Local 79 rallied at City Hall in support of the One45 Harlem development project  and spotlighted the project’s workforce housing proposal that will bring family-sustaining unions jobs to Harlem. The rally came ahead of a New York City Council hearing on the One45 development planned for W145th Street and Lenox Avenue in Harlem.  The development would house a diverse cross-section of residents, including union workers, formerly homeless seniors, low and moderate-income New Yorkers, and those who can afford market-rate rents.

At the rally, speakers highlighted the One45 project as a model for how neighborhoods across the city can create high-quality workforce housing at rent levels that union members can afford, and help residents stay in neighborhoods where they have lived and worked for years. (An archived livestream of the rally is available here.)

One45 will address a growing need for workforce housing in New York City. Typically, housing development projects only provide housing at market-rates and at low-income levels through Mandatory Inclusionary Housing (MIH). That means households headed by one or two union members cannot qualify for typical MIH units and often cannot afford market-rate rents. Union members working to build and maintain new housing in New York City should be able to live here, too. 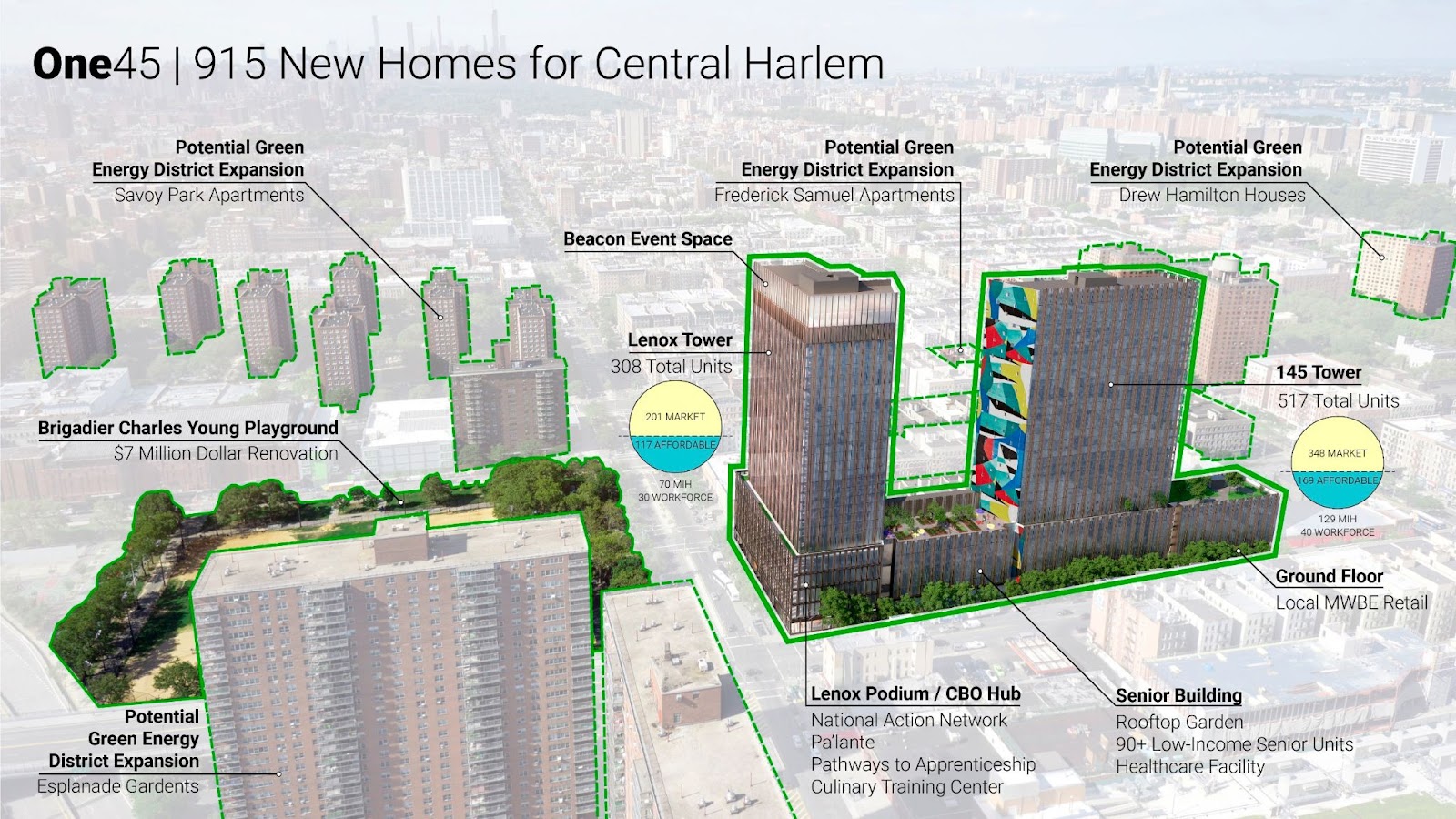 Kyle Bragg, President, 32BJ SEIU said: “We came out in force today to demand well-paying union jobs for Harlem families. At a moment when unemployment remains stubbornly high throughout our city, we should look to models like One45 that will allow us to rebuild New York’s economy and deliver a ticket to the middle class. We call on our city’s leaders to support this common sense project, which will allow Harlemites to stay in their neighborhood and provide rents union members can afford.”

“More than 300 Laborers’ Local 79 members live in the New York City Council district where One45 will be built. This project will create good union construction jobs and much-needed affordable housing for Harlem residents who are seniors, low-income, moderate-income, and earning union wages. One45 shows how the city can create mixed-income developments to tackle the affordability crisis that impacts New Yorkers across a range of income levels. I urge everyone in the New York City Council to support One45. Many long-time Harlem residents will benefit from this project. The One45 development will be woven into the fabric of the Harlem community, and include ground-floor space for Pathways to Apprenticeship, where formerly incarcerated New Yorkers will receive training for careers in the construction trades,” said Barrie Smith, President of 100 Black Construction Workers, and an executive board member of Laborers’ Local 79, where he also serves as a Harlem business agent for the union.

With more than 175,000 members in 12 states, 32BJ SEIU is the largest property service workers’ union in the country.

The Other Tech Layoffs: Janitors Protest Outside Twitter HQ in Manhattan