NY Rallies in Support of Gambian Immigrant Under Threat of Deportation

New York – The wife, young children and extended family of a Gambian immigrant who works as a porter in an Upper East Side building asked for his release from immigration detention on Wednesday morning, accompanied by members of his union, his imam, elected officials and community groups, outside federal immigration offices in Manhattan.

Baba Sillah, 48, was detained by immigration authorities on January 31 when he reported to a regular check-in at 26 Federal Plaza in downtown Manhattan. “It was so cold that day, that I didn’t go with him as I usually do because I didn’t want to take the babies out,” said Sillah’s wife Mamou Drame Sillah, who is a US citizen, originally from Mali.

Baba, who has lived in the US since 1993 and worked as a porter in the Upper East Side since 2006, had applied to adjust his status and get permanent residency because he is married to a US citizen and supports five US citizen children: Ebribima, 16 (a boy); Aminata, 10 (a girl); Isha, 4 (a girl) and Fatima, 9 months old. He is currently being held in the Hudson County Correctional Center in Kearny, New Jersey, and has not been able to see his family since he was detained.

“We thought that we were on our way to get Baba his green card so we could continue building our future here,” said his wife Mamou. “It was a shock when he was taken. I don’t know what we’ll do if he has to go back to Gambia. It will be a terrible hardship for our family, for our kids, for me and my mother, who depend entirely on him as our support.” 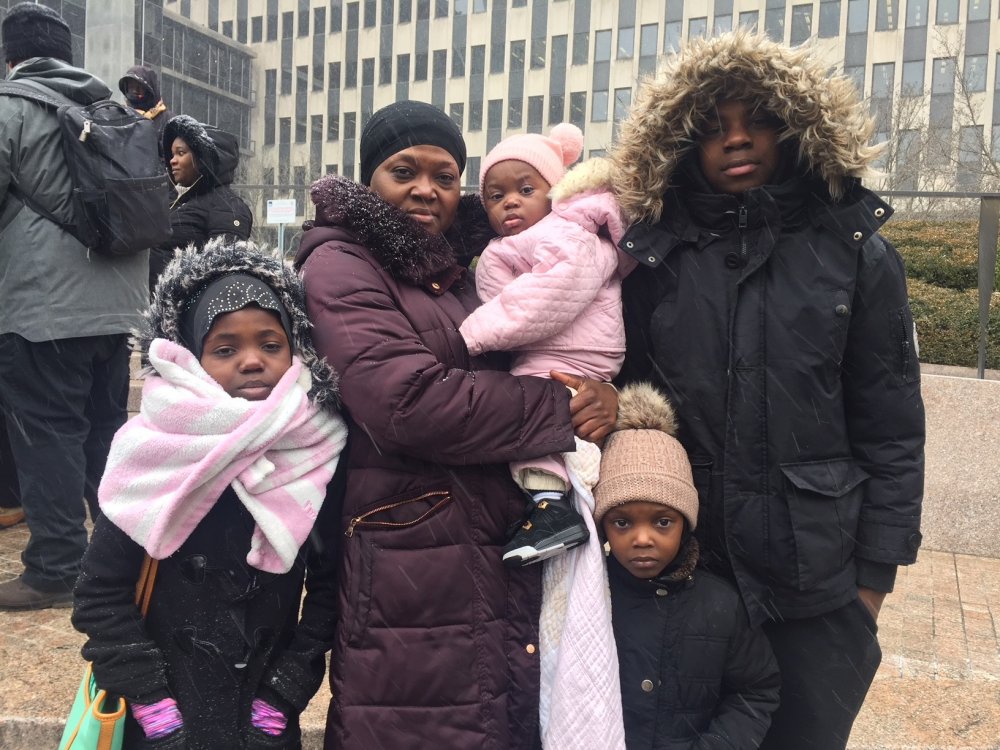 Mamou and four of the couple’s five kids (one currently lives in Senegal) spoke out about Baba’s situation accompanied by Imam Iamin Gassama, elected officials, members of Baba’s union 32BJ SEIU and members of African Communities Together, while the crowd chanted “Bring Baba Home.”

“Baba is one of us, he is a good man, he is always praying, and he is considerate and family oriented,” said Imam Iamin Gassama, who runs the mosque the family attends. “We pray for his release so he can rejoin his family.” The Imam prayed in Arabic and asked “Allah, release Baba, Allah help Baba’s family.”

“Sadly, this is not the first time we come here with our allies, to defend the right of one of our immigrant brothers or sisters, and we will come out every time we need to, to ensure families remain together,” said Walter Cooper, a member of 32BJ SEIU’s executive board. “We will continue to resist Trump’s racist and cruel immigration policies that aim to tear apart families like Baba’s, which make our city and our country beautiful and strong.“

Rep. Nydia Velazquez joined in support of Sillah’s family. “It is absolutely outrageous that Baba Sillah — dedicated father, husband, and 32BJ member — is being detained and could be deported. I join 32BJ SEIU and community leaders in demanding Sillah’s release,” she said. “The Trump Administration’s inhumanity knows no bounds. I will do all I can to oppose these horrific policies that tear families apart and to fight for comprehensive immigration reform.”

“Here we go again, dealing with the Trump Administration and his immigration policies,” said Manhattan Borough President Gale Brewer. “We all know that New York does not exist without immigrants, generation after generation, and this is the kind of family we want to keep in our city. That’s why we are supporting Baba Sillah and his family and ask that he be allowed to return home.”

“Baba Sillah is a man whose personal conduct and professional career is defined by service to others,” said Council member Francisco Moya. “As a 32BJ member for well over a decade, he is a symbol of justice and workers’ rights. He is also a dedicated family man, caring for his five U.S.-born children as their primary financial provider. This is a man of integrity who has earned the right to reapply for admission to this country. I support him in this cause without reservation.”

“We think it’s a shocking sign of how broken the immigration system of the US is that a hard working long time resident of the US with US citizen family members should be ripped from his family because immigration is not doing its job processing his residency application in a fair and timely way,” said Amaha Kassa, executive director of African Communities Together.

With nearly 163,000 members in eleven states and Washington, D.C., 32BJ SEIU is the largest property service workers union in the country

The following statement can be attributed to Kyle Bragg, President of 32BJ SEIU:     As President of a majority Black, brown,

The following statement is attributable to Roxana Rivera, Executive Vice President of 32BJ SEIU. “We are troubled by the allegations against Ricardo